You are here: Home / Development / Gravity Forms: How To Pre-Populate Fields

In general with HTML forms, assigning a pre-specified value to a field input is pretty straightforward.  For example, the one line of HTML below:

will produce the following input box.  Note that “My Value” is already pre-populated as the field input value, since the HTML contains the attribute value=”My Value”.  Of course, this is just a default value and since it’s a form input, you can change it to whatever you like.

Achieving this pre-populated state with Gravity Forms in a dynamic way is what we’re addressing in this post.  In other words, we seek the opportunity to populate the form fields with post data, user data, or other variables instead of a fixed value that is set in the backend.

Unlike the simple HTML example above, when using the Gravity Forms plugin for WordPress, we don’t exactly get direct control over the HTML out of the box.

So, how can we dynamically pre-populate our form fields if we don’t have direct access to the HTML generated by Gravity Forms?

Hooks To The Rescue

This is an example where we can use WordPress hooks to accomplish our goal.  We can “hook into” the Gravity Forms process and pass it the data it needs to pre-populate the form fields.

In order to use hooks for pre-populating fields, we must first tell Gravity Forms the names of the fields we wish to pre-populate.

Setting Up The Form In The Backend To Enable Pre-Population

Assuming you have already created a form, go to its edit screen in the WP backend.  Our example is a simple form with two fields (“First Name” and “Last Name”). 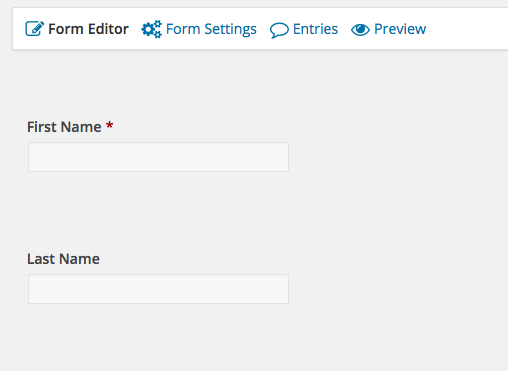 Click on a field that you wish to pre-populate.  In our example, we’ve opened the “First Name” field. 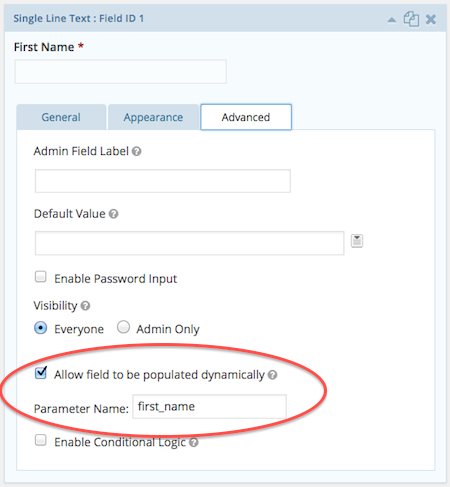 Once the field options dialogue box opens, click on the “Advanced” tab as shown.  Make sure to check the “Allow field to be populated dynamically” checkbox as indicated, and then give the field an appropriate Parameter Name (or key).

Your key should have only lowercase letters and underscores, and it should also be a sensible match for the field label.  In our example, we used first_name as our key since the field label is “First Name”.

You’ll need to repeat this process for each field you want to pre-populate.  In our example, we would also need to edit the “Last Name” field and make the corresponding changes in the field dialogue box, using last_name as the field key.

Hooking Into Gravity Forms On The Front End

Now that we’ve told Gravity Forms which fields we will pre-populate and which key we’ll use for each field, we can add the appropriate hooks into our code.  You’ll need one hook for each field you are pre-populating.  Note the use of the field keys first_name and last_name which were created in the above step.

Finally, as with any hook, we need to define the callback function for each field.  This is what will determine each field’s pre-populated value.

Below is a simplified version of what we might eventually end up using for our callback functions.  The example doesn’t have much practical use, but it does illustrate that you simply need to return a string for each field.  Note that the $value variable we are given is the default value set in the backend for each field and may be empty.

In reality, you may be using post/postmeta values or values from the logged-in user.  Whatever case you run into, you should be able to access WordPress data as usual within your function.  For example, the global $post variable or the wp_get_current_user() function may come in handy.

Note we’ve done some refactoring to make it easier to add even more fields.  We’ve also combined the callbacks into a single function to illustrate how one might go about this process on a larger scale.

Comments From The Blog